Storing data in real-time data streams has always been a challenge. The solution depends on your use cases. If you want to store data for daily or monthly analytics, you can use a distributed file system and run Hive or Presto on top of it. If you’re going to run some simple real-time analytics, you can store the recent data in Elasticsearch and run Kibana for charts.

Apache Druid was made to address both of the above use cases at the same time. It can serve as a durable data store for daily or monthly analytics. It can also serve as the fast queryable data store, which allows you to push and retrieve data in real-time.

The issue, however, with earlier versions of Apache druid was ingesting the data from streams in the database. Let’s take a look at what challenges the developers faced earlier.

Tranquility is a package provided by Apache Druid to ingest real-time data. Tranquility is not exactly but equivalent to JDBC or Cassandra drivers. It handles partitioning, replication, service discovery, and schema rollover for you. The user needs to be concerned with the data and the data source he needs to use. 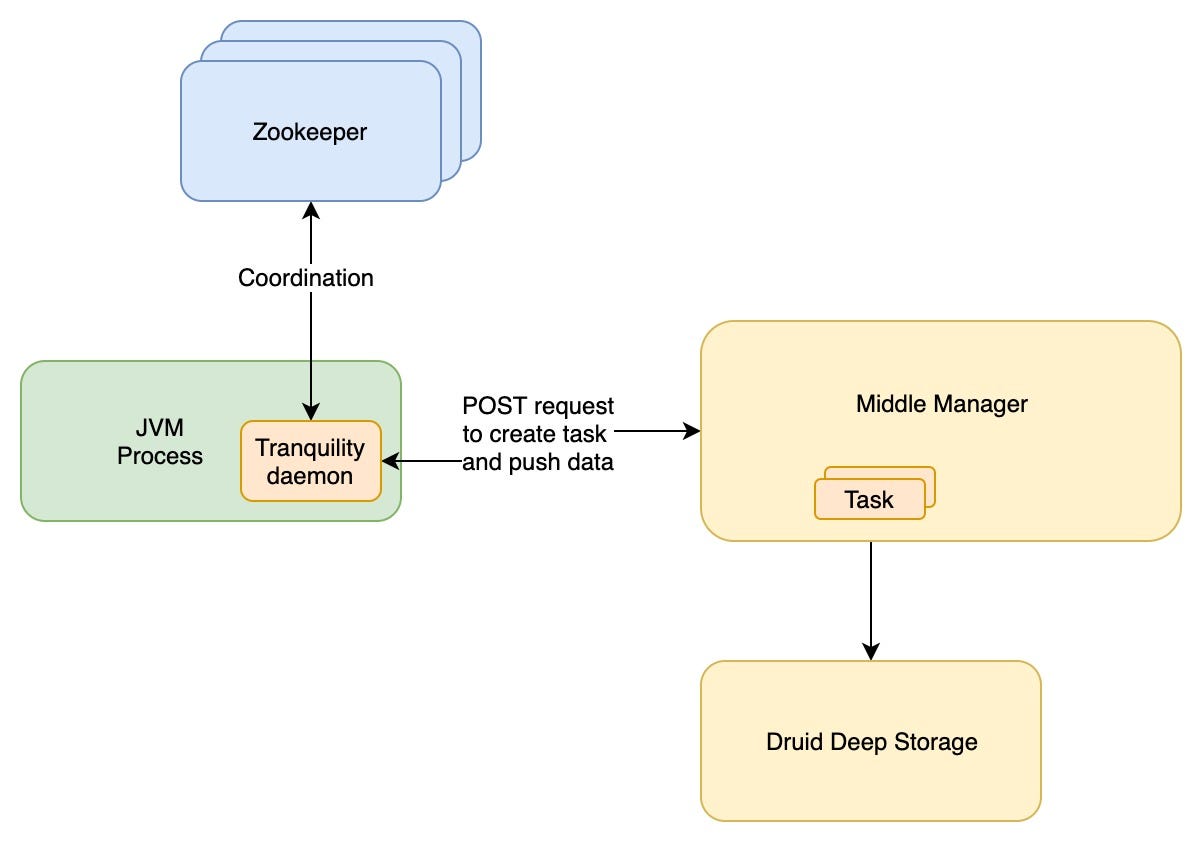 Tranquility addresses a lot of the problems which a user might face. However, it comes bundled with its own set of challenges.

This situation leaves the user with the responsibility of de-duplication the data. It can even lead to incorrect graphs in Apache superset if you are using one.

The most concerning issue with Tranquility is the data drop. There are various circumstances under which Tranquility intentionally or due to an error fails to insert the data. Some of these cases listed in the official documentation are —

The worst part is in most of these cases, you wouldn’t even know that your data has been dropped till the time you query.

Since Tranquility daemon runs inside your JVM, it’s the responsibility of the application to handle errors such as timeouts. In the case of applications such as Apache Flink, not managing one of these errors effectively, can lead to unwanted restarts.

On top of all these issues, Tranquility is built for druid 0.9.2. Using it with current druid version 0.16.0 can create unidentified problems.

To address all of the above problems, Apache druid added Kafka Indexer in version 0.9.1. The indexer remained in the experimental state until version 0.14.

Kafka Indexing Service first starts a supervisor according to the config specified by you. The supervisor then periodically starts new indexing tasks, which are responsible for consuming data from Kafka and publishing it in Druid.

Unlike Tranquility, Kafka Indexing Tasks can be long-running. Multiple segments can be published after a minimum no. of rows or bytes have reached without starting a new task.

The Kafka indexer provides an exactly-once guarantee to the user. This guarantee is possible since the default Kafka consumer since Kafka 0.11.x provides out of the box support for this semantics.

Kafka indexer is designed to publish delayed data. It’s not subjected to the windowPeriod considerations of Tranquility. This ability gives a user the freedom to backfill data from a particular offset in Kafka to Druid.

Although Tranquility also supports schema updates, it’s much easier to do in Kafka Indexer. You just need to submit a POST request containing the new schema and the supervisor will spawn new tasks with the updated schema. You don’t require any changes on the producer end.

In case you add new columns, the older rows will show empty values in those columns, but the rows will still be queryable.

Kafka Indexer services solved a lot of issues that the developers faced when they were using Tranquility. If you want to get started with the Kafka Indexing service, you can refer to the Apache Kafka Ingestion in official Druid documentation.

A Glimpse into the World of Embedded Database Feat. RocksDB

Why you should care about a KB?

How System Clocks Can Cause Mysterious Faults?

Here are some simple optimisations to squeeze performance out of CPU

How to Run Apache Flink Effectively on YARN?

Here’s What Can Go Wrong with Database Replication